Laurie (TheSafestScents.com)
Tomball, TX, United States
My name is Laurie. I'm 34 and I live in a suburb of Houston, TX. My life isn't super exciting or ultra dramatic, but I love it! My blogs are just a peek into my life as I know it. I'm quite random and have an opinion on everything, but I love everyone's aspect on things, even if I disagree. The world would be quite boring if not! :-)

Positivity and Reflecting Back

Here we are, at the end of 2010.   Overall, it's been a great year.   I've had some really low points too, mostly health related with this stupid ulcer that came back AGAIN.
I am not one for resolutions, but I do want to try to make 2011 a POSITIVE year.   I think it will help my overall health to try to be a glass half full kind of person.  I usually am, but I've lost some of that somewhere along the way, and I definitely want to get that back.
I also want to stop obsessing.  About everything.   I can't control everything, and I need to make myself understand that.   I'm 3 years out from surgery and have maintained my weight within 5-10 pounds for 2 years.  That's pretty damn good!   I am not exactly where I want to be, but I am so close.  I need to stop revolving my life around losing those last 5-10 pounds and focus on living and just being happy.   Food does not should not control me.  It shouldn't consume my thoughts like it does now.
Here's to 2010!
I'm looking forward to 2011.  I know I'll be having surgery for my ulcer, but I'm thinking of it in a positive way.   No more suffering with this damn thing after that!   AND, I'll get some time off of work! HA! 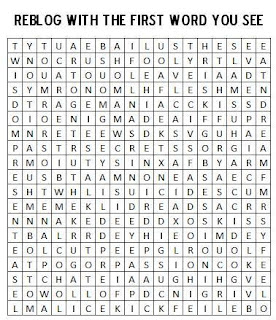 Posted by Laurie (TheSafestScents.com) at 10:14 AM No comments:

I'm a little late on this (just 5 years), but over the past few weeks, I've developed an addiction to the show Dexter!    The first 2 seasons were on Netflix through our PS3, and I watched those two seasons over the course of a week...  then I rented season 3 and 4 at Blockbuster.. I hadn't set foot in a Blockbuster since the late 90's! LOL    And then I got to Season 5, which just finished a few weeks ago on Showtime... so, what did I have to do?   I'm now a Showtime subscriber! LOL
I heard that the Big C is a really good show as well, so I'll probably start watching that one while I have Showtime!
I got Showtime yesterday morning, and I'm already on Episode 6 of the most recent season.. I don't know what I'll do with myself once I'm done... maybe get off my ass and start working out again?  Hmm...
Hope you all had a wonderful Christmas! Mine was very nice! My awesome boyfriend got me an iPad for Christmas! I was totally shocked...   wahoo!   Did you all get some awesome loot as well?
Happy New Year!! 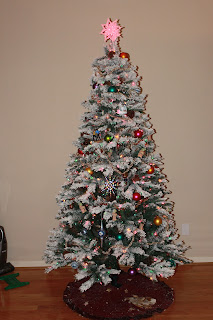 I'm not much in the Christmas spirit this year, and it sucks!  I think it's partially due to the fact that I've had a cold or the flu or something since the day after Thanksgiving, and I can't seem to kick my cough... and the other part is that I've done most of my Christmas shopping online this year.   It's not very conducive to adding to my holly jolliness!!
I stayed up till 1 am last night wrapping almost all of the gifts that I've purchased so far, and I'm almost done with everyone on my list!   That did help a little.. it'd help even more if I didn't wrap like a 12 year old boy! Ha!
There is a picture of our tree - John was sweet enough to put it up and decorate it for us since I was under the weather!  :) He did a good job decorating it!
Also, here is a picture of us from the day after Thanksgiving... my sister took the pic.  A few hours later, I was down for the count with the flu or whatever it is! lol 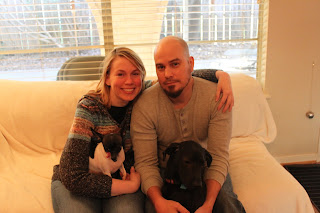 Prompt: Wisdom. What was the wisest decision you made this year, and how did it play out?

This one is easy for me - my wisest decision this year was becoming a consultant for Scentsy. I've made my quest for debt freedom well known on this blog, and this has helped me a lot.   In my first 2 weeks, I earned enough money to pay my electric and cable bill ($250!).   In the month after that, I earned over $350.   It's helped with my Christmas shopping (by using Scentsy products as a gift, and by the extra money I've earned), and I have FUN doing it.  I've been looking for a new "hobby", and I have found it, so it's got a lot of benefits.

On other aspects of life, I'm trucking along.  Work is work..   I start my time off next Friday, so that will give me a much needed break.   I've set some goals for myself over that time - meal planning, getting organized, getting on a workout schedule, etc.    Ever since I got my ulcer, I haven't been back to the gym, and my eating has been lax.  I gained back the weight that I lost when I wasn't able to eat anything, and I need to get back on track.  Weight Watchers has the new PointsPlus, and I know it's a great program, but it hasn't hit me yet, and I am not in the good habit of tracking lately... Ugh!!

I'm not sure why I have so many different fonts going on here, and it's not letting me change it! LOL


I hope you all are doing great.. I'm trying to get back into my bloggy ways as well...    Here's to new forming new (renewed), healthy habits!!

I'm a little behind on jumping on this bus, but it looks like a lot of fun, and since I'm not feeling very inspired lately, this will give me stuff to write about.. Ha!
On Reverb10.com, there are daily prompts, and then you write about whatever the prompt is.  Today's prompt is:
December 9 – Party Prompt: Party. What social gathering rocked your socks off in 2010? Describe the people, music, food, drink, clothes, shenanigans.

John and I have lots of social gatherings at our home.  It's so hard to pick favorites because it's usually the same group of dear friends.    I'd guess that the Halloween parties are my favorite, as everyone is a little out of their normal element and I get to see my friends' creativity in action!    This year, I was Maleficent from Sleeping Beauty and John was Border Patrol.. ha!  We've never done the matching costume thing, although I do think that's cute... Just saying it's cute would be a huge negatory for John though! :-)
I'll put up a few pictures later on from this year's Halloween party.  I'm at work and don't have them here, unfortunately!

I actually TRIED to keep the food simple this year, with several dips, chips, etc, but it never stays that way.  John doesn't feel like it's a party if he doesn't light up the grill... So, we ended up having steaks and fajitas too... and lots of beer for the boys, jello shots for the girls, etc.
Posted by Laurie (TheSafestScents.com) at 3:07 PM No comments: